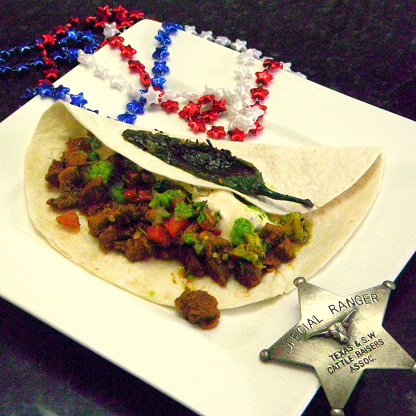 Yeap, last night the stars were bright as we celebrated all (well some) things TEXAS!

A couple of weeks ago, I was contacted by one of my favorite bloggers (and regular contributer to eRecipeCards.com), Heather, the GirliChef about participating in a Cookbook spotlight and Cook-Off invitation.  Exciting enough, I love this type of contest -spotlight- giveaway.  More than just a random number drawing, if you want the freebie, you have to earn it.

So, the deal is we get a book for free, and we post 3 recipes and a review of the book.  OK, I can do that.  Then I read that there will be 19 participants.  Each of those 19 will be cooking and posting the same recipe.  Now that is intriguing.  I not only cook a recipe, but I can take a look at the different photography skills with the same recipe, read over the different writing styles of the same recipe and get introduced to new blogging buddies! 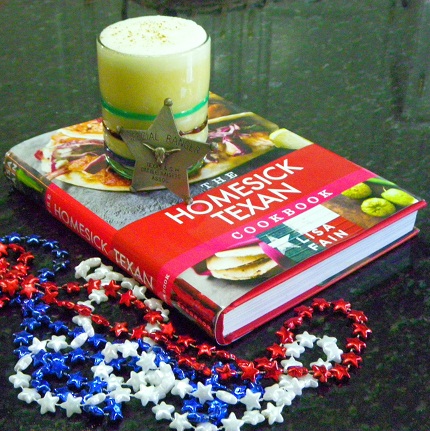 But then I got even more excited by the concept...
The book in question is, The Homesick Texan Cookbook, written by Lisa Fain.

Dig a little deeper into Lisa Fain and you see another reason to howl,
YIPPEE KI-AY and hoist a drink in toast to a legend in my mind...

Maybe it will help if you hit play on this youTube video...

I think everyone in life deserves a theme song, And for me at least, this should be Lisa's.  The video starts wiht a very lonely girl unpacking her boxes after moving to the big city (then it gets weird with swirling Abba heads, so only watch the first couple of minutes and then come back and read more while the music plays).

That's what Lisa was.  Lonely homesick Texan moving to the big city (New York).  But she certainly made the best of it.  She used Texas cuisine to introduce herself to her new friends, then started a blog!  Yeap, she is indeed ONE OF US (see, that's why she gets a theme song).

Homesick Texan is indeed a food blog, telling the story of one expatriated Texan in the big city.  It is very personal, telling stories of her friends (taste testers) and family but mostly of herself and her struggles to find ingredients, adapt to more seasonal cooking and her hunts for authentic Texas faire in the land of nouveau cuisine. 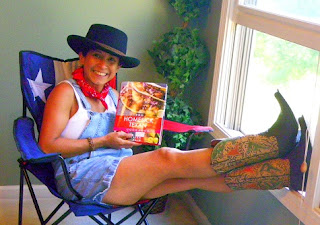 My good friend Herme (neighbor as well as frequent taste tester for my efforts) is also a homesick expatriated Texan.  Forced out of her native land to the wilds of big city (suburban) life, she was very excited when I simply sent her an email saying, "dinner party for homesick Texan, bring props".

I probably should have checked with her prior to the party, as I made a pitcher of Sweet Tea to serve with the Texas meal. 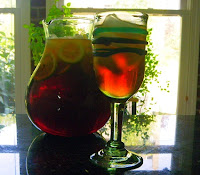 Herme informed me that, in fact, the "House wine of the South" is in reality not a common Texas drink.  Sure enough, when I double checked the index in the book, as well as the search function on Homesick Texan the blog, Lisa has never done a post on sweet tea.

Of course, after reading the forward to the book and reading over her blog, I realized that she had moved before that bitch Katrina had displaced thousands of New Orleans residents to eastern Texas.  I suspect that these immigrants influenced more than one Texan to give this a try.  So, I blame the ever evolving Texas cuisine for not catching up with Lisa during her all too brief visits home.  Yeah, that's it, ever changing, not my poor research.

BTW, real quick, make a pitcher of sun tea (sadly, that's my pitcher of tea sitting on my smoker.  I had to explain why I had a pork shoulder and yet was not going to fire her up and smoke it... Smoker's know these things and take it personal, but I digress and will get to the recipe shortly) and make a "simple syrup" to make it sweet.  1 cup water, add 2 cups sugar, bring to boil while stirring constantly, remove from heat, continue to stir for 5 minutes.  Allow to cool, add to the tea.  Much different than "sweetened tea". 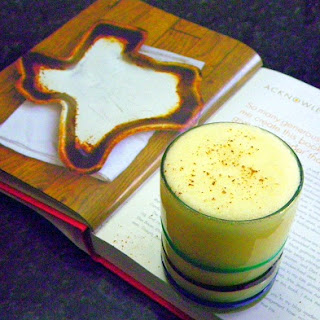 But, since this is not about the south, but about all things Texas, I won't bore you with my next Texan Faux Pas when I made a fancy Pina Colada (actually a "Painkiller").  My resident homesick Texan told me that Texans like their beer and enjoy a shot and rarely serve foo foo mixed drinks.  My intention was to virally serve up a toast with this Caribbean treat to Lisa as an acknowledgement to her accomplishment (and if you can't tell, the drink is actually sitting on her acknowledgement page of her cookbook).

But again, as her preface says, Texas is pretty big.  I would venture to say that more than a few spring breakers visited Galveston Island and enjoyed a nice cool refreshing rum drink.  Herme (like I am sure Lisa) was warned away from the debauchery of Spring Break on the Key West of Texas.  But Herme has succomed to the debaucheries of my Cul de Sac and regularly imbibes.  Makes me wonder if even worse debaucheries exist in NYC for Lisa to avoid... Things that keep her mother up nights... 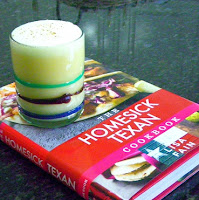 But I digress...If only rum drinks were Texan, I would hoist a few PAINKILLERS in tribute to "One of us"... 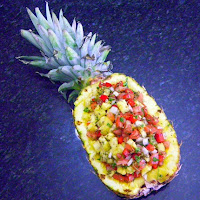 But they are not.  And near as I can tell, neither is my Caribbean Salsa recipe...

Well, maybe it is.  Lisa does have a recipe for Pineapple Salsa on her blog.  And, she uses it on several recipes.  So it must be a Texas thing.  Although my neighborhood Homesick Texan assured me that it was sacrilege to add pineapple.  And in comparing recipes, hers is not close to mine, so I will continue to put this in the Faux Pas catagory. 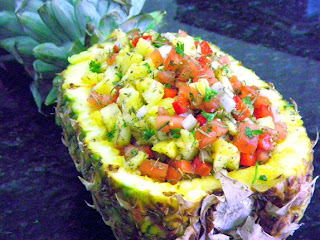 So, this didn't fit either... despite the wonderful presentation possibilities of loading up a hollowed out pineapple with....

So, that's what I did wrong in my tribute to Texas dinner.  But in my mind, and in the heart of my personal homesick Texan, I hope my efforts showed... 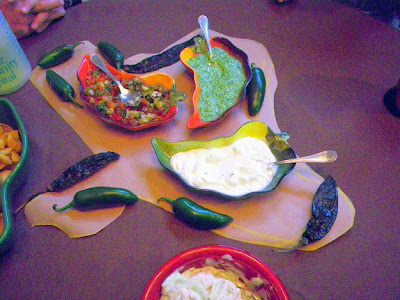 So, let's get to the recipe and see what I did right... 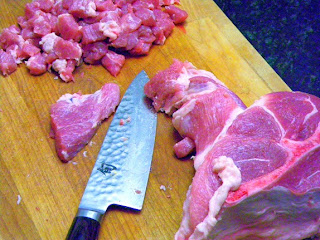 Let's start with my one complaint and get that out of the way...

The title of the dish

Lisa calls this "Pork Tacos Dallas Gas Station Style"  She tells a wonderful story about a corridor near Dallas where seemingly every gas station offers their version of this quickie delicious meal.  Well, i am going to tell you that no gas station would make this recipe as she lists it.  I own a pretty good knife and I keep it sharp (my knife cast more than my first car, but that's a story for another time).  I am a griller and smoker and actually am considered one of the best pulled pork makers in my very competitive neighborhood filled with grillers and smokers.  I know my way around a pork shoulder.  Worked with them before and often.  But it still took me over an hour to trim and dice the two pounds of shoulder to 1/2 inch size.  Let's do the math... my 2 pounds (actually, I asked my butcher to do a 2 1/4 pound shoulder, bone in.  Once the bone was removed and the fat trimmed, I ended up with 2 pounds of meat... but I digress); my two pounds of meat  in the hands of a competent knife guy took over an hour.  I honestly do not see how anyone could do it in less time (unless they fudge on the half inch size and make them bigger (I've seen your pictures, you know who you are)). I made 6 tacos from the 2 pounds.  That's a lot of labor cost to prep this dish.  So, from here on out, I am calling this "Pork Tacos Dallas Gourmet Taco Shop Next to the gas Station Style".

But, that's it.  Plan to spend a good hour (longer if you have dull knives or are not used to trimming meat) of prep time.  For me, that is a lot of prep time. 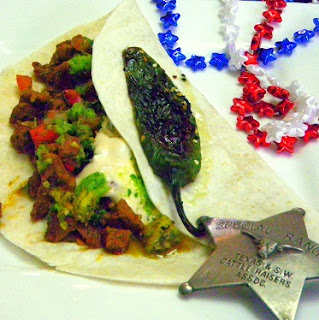 But it was worth it!

Deep rich flavors, the mix of peppers, combined with the citrus juices in the marinade made for quite a surprising treat.  Again, fitting for any Gourmet taco stand.

If you will permit one more criticism... I was given an advance copy of this book to review.  I felt an obligation to cook as directed.  I loved the marinade and would certainly use it again.  BUT, the fast 15 minute cook time (the real reason for dicing the meat so small) is not my method of choice for pork shoulder.  After marinating as directed, I would make a mop sauce from the same ingredients and cook either on my beloved smoker or in a slow cooker for hours to get the most tender and flavorful pieces of meat for the filling.  ALSO, once slow cooked, it is a simple matter of taking a couple of forks and shredding the shoulder into bite size bits.  My educated opinion is that the meat would be just as tasty and save at least that 1 hour of prep time.

But that's just me.  Like I said, as printed, as made, I have ZERO issues with the taste.  the tacos were indeed worthy of a gourmet taco joint! 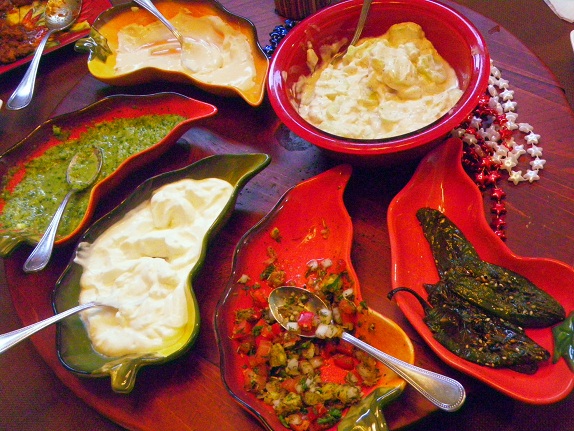 And wonderful fun for a dinner party... Set up a lazy Susan with roasted Jalapeno Pepper, my fake Texan (Caribbean really) Salsa, Sour Cream, A sweet Cilantro sauce, and a Queso Cheese to top as you like...

And my wife enjoyed the book so much she made a delicious cool cucumber salad (page 258) that paired perfectly with the spicy tacos!

Truly a wonderful TEXAS meal made deep in the hearts of suburbia!  Thanks Lisa and Congrats on the book! 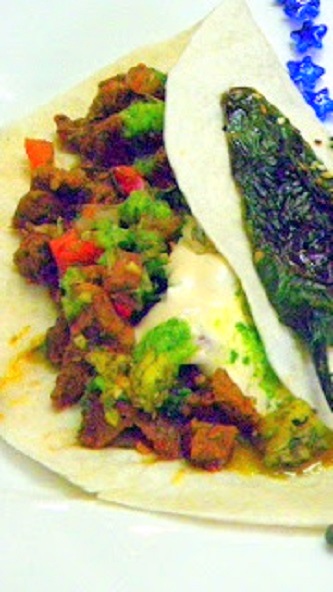 
Toast pasillas in a dry skillet over high heat for ~10 seconds per side, or until they start to puff and change colors.  Fill skillet with enough water to cover chiles and bring to a boil.  Turn off heat and let chiles rehydrate until soft, ~30 minutes.

Place re-hydrated chiles in blender (discard soaking liquid) along with the chipotle, garlic, oregano, cumin, cloves, orange juice, pineapple juice, vinegar, and olive oil.  Blend to a smoth purée.  Add salt to taste.  Toss pork with purée (I put everything into a gallon ziploc bag).  Let sit in the refrigerator for at least 8 hours.

Before cooking, let pork sit at room temperature for 30 minutes.  Heat vegetable oil in a large skillet over medium heat.  Fry pork in the skillet for 15 minutes, stirring occasionally.

While pork is cooking, place jalapeños under broiler and cook for ~10 minutes, or until blackened, turning once.  Serve pork in warm tortillas, topped with cilantro and onions, along with the roasted chiles and lime wedges...and salsa, if you like.

If i have tweaked your interest in anything Texan, and all things Texas Cuisine (except for rum drinks in Galveston Island), The Homesick Texan Cookbook will be available for sale on September 13th.  And Lisa's blog is up and ongoing at HOMESICK TEXAN.

Posted by Inspired by eRecipeCards at 10:31 AM