Honey, Brie and Onion Pizza ala Tv Food and Drink 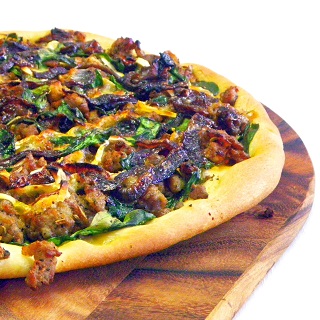 And Sausage... Sorry Gary, I added Some spicy sausage to your recipe.  It paired well with the sweet of the honey, the creaminess of the brie and surprising extra taste of caramelized red onions! 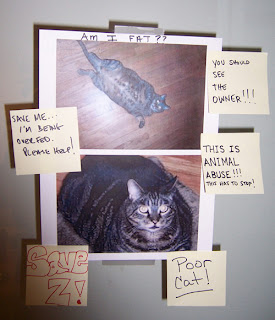 Today's blogger, Gary of the TV Food and Drink blog, has a fun read blog.  He does blog food on occasion (like this pizza idea), but he also blogs quite a bit of TV.  His reviews and capsulations of reality TV shows are usually much more fun to read than to watch.  He occasionally breaks into scripted shows (like his recent take on Person of Interest), but you are more likely to get the low down on Dancing with the Stars Nancy Grace's wardrobe malfunction!

He writes a personal blog with glimpses into his life.  he is a Southern California guy, living with a lazy overweight cat (aren't they all???), who does indeed work in the TV business.  He does have a gentleman friend (MG) he cooks for, a fascination with classic (and not so classic) movies, hip 50's and 60's crooners, and he can take the BEST photos of drinks I have ever seen...

Gary recently ventured into the world of podcasting...

He does a few series (like the Dancing with the Stars reviews (saves me time), his cat abusive "Am I Fat" series of pictures of Z (his cat).  And recently he has started a Pizza and a Movie series, where I picked up this gem (the pizza... not so much the movie)!

He started out innocently enough with an obscure Hitchcock film, Stage Freight (and a wonderful sounding Greek Pizza with Pancetta).  next, in a failed attempt to justify his favorite Bond, he treated us to The Spy Who Loved Me and a spicy adaptation of a Hawaiian pizza he calls, Hula Heat Pizza.  Next Gary ventured just a tad left of center with 50's horror classic, The Black Scorpion and a Chicken BBQ Pizza with Prosciutto.  He took a horrendous turn to the dark side with a review of BERSERK, Joan Crawford's last movie.  Personally I think he just wanted to show this video he made of himself and MG enjoying the best part of the movie.  Not since the 3 AM guests on a Jerry Lewis Telethon in the 60's have we seen such talent ...


Plus, any Oscar-winning actress who’s willing to deliver the line, “Presenting Phyllis Allen… and her intelligent poodles!” with not a shred of embarrassment is a winner in my book.

Them were the days... Oh, and his Prosciutto Arugula with Fontina Pizza sounded much better than the movie deserved.  Which brings us to #5 in the series, his vegetarian Honey Brie and Onion Pizza (and a few clips of the 1942 live action The jungle Book). 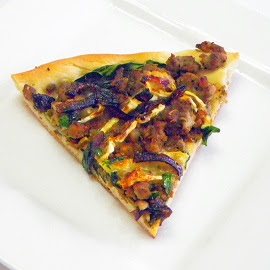 And this is my version. 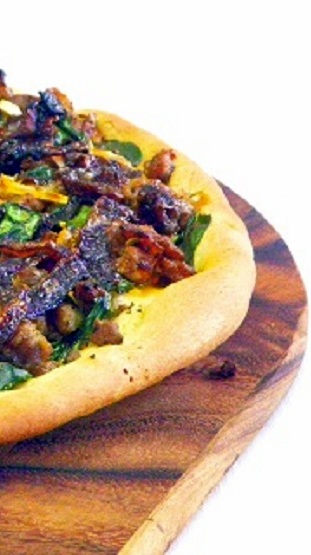 Once again, I only made one change, so no sense in me copying Gary's recipe.

MEAT... it's what we do in Kansas.  I browned a pound of spicy sausage and used it as the base.  I did caramelize my red onions and I made a home made pizza crust, as Gary's post suggested.  Gary's pizza uses red pepper flakes to add the spicy kick, I just love the mix of heat and sweet in this pizza.

Gary always does several "in-process" photos of his pizza (Like the one to the left).  His easy to follow directions and tips would make a pro of a first time pizza maker!

Follow this link...Pizza and a Movie #5: Honey, Brie and Onion Pizza with The Jungle Book (1942) to see his original recipe and post. 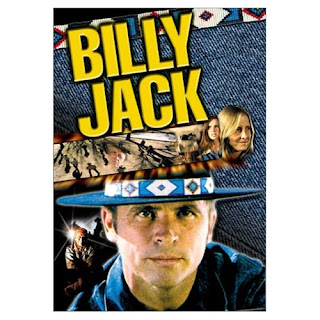 Maybe a ground swell of support for "Billy Jack", the greatest movie of all time as a choice for his next Pizza and a movie night!!!  Gary, if you are looking for a goof factor, look for a very young Howard Hessman (WKRP in Cincinnati) as the drama teacher at the Indian Freedom School).  And, in case you were looking for a tie-in to the rest of your pizza and a movie series, here's a direct quote from the movie...


Bernard, I want you to know... that I try. When Jean and the kids at the school tell me that I'm supposed to control my violent temper, and be passive and nonviolent like they are, I try. I really try. Though when I see this girl... of such a beautiful spirit... so degraded... and this boy... that I love... sprawled out by this big ape here... and this little girl, who is so special to us we call her "God's little gift of sunshine"... and I think of the number of years that she's going to have to carry in her memory... the savagery of this idiotic moment of yours... I just go BERSERK!

So, tie in to Berserk, and granted, Howard Hessman is no Paula's Dancing Poodles (what could be), it's the logical choice.

And if he takes our advice on this movie, imagine what crap we could make him watch... it could become our little Skinner box project.

So, if I have tweeked your interest in Gary and his TV FOOD AND DRINK Blog, head on over and say HI for me (and mention "Billy Jack")! 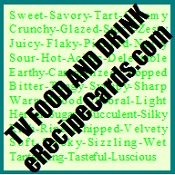 And for a quick look at what he blogs, click on the logo link image to the right.  You will see all the eRecipeCards that Gary has submitted to eRecipeCards.com.  You can add his recipes to your eRecipeBox (once you have a free account).


These posts continue to highlight bloggers and recipes that I have found on  "eRecipeCards.com"..
Posted by Inspired by eRecipeCards at 10:01 AM