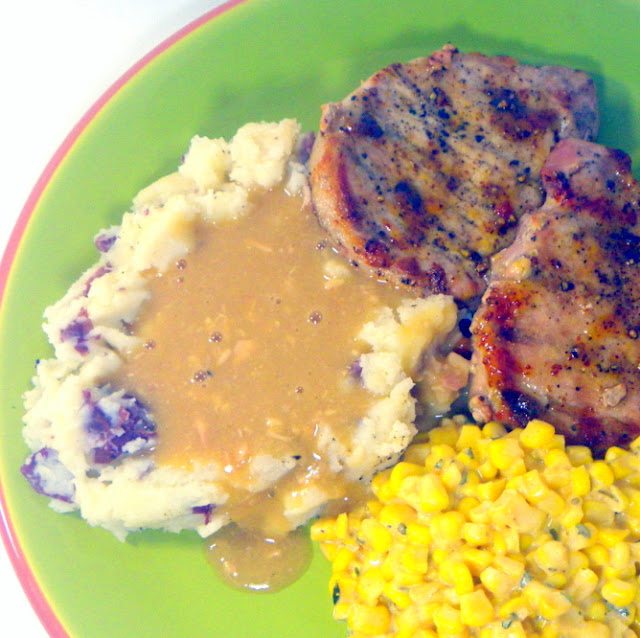 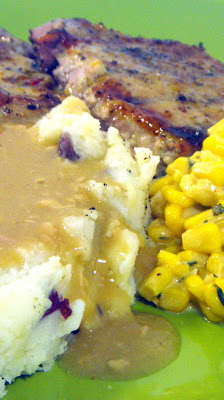 I think gravy is one of those lost arts that Mothers and Grandmothers have let slip more than any cooking skill.  When I think back to my own youth (5 decades ago), I only think of pork chops served like the photo to the right.  Sure, I fancied up my corn better than I remember and my chops are grilled with my own home made Peach-Habanero BBQ Sauce that Mom never tried...

But those mashed potatoes and gravy are straight from my memories of Mom.

Why don;t we see more gravy on blog posts???

Ah well... I love making gravy from my weekly store bought pre-cooked, pre-seasoned Rotisserie Chicken. I use the meat from a single chicken wing to make the gravy appear fake Giblet, but this has all the taste (or more) than any gravy I have ever made.  And certainly better than the packets you can buy.

And this has the advantage of being FREE provided you use the Chicken Stock you can make so easily from the bones of a Rotisserie Chicken.

Oh, and if your Mom forgot to teach you how... Gravy really is easy... 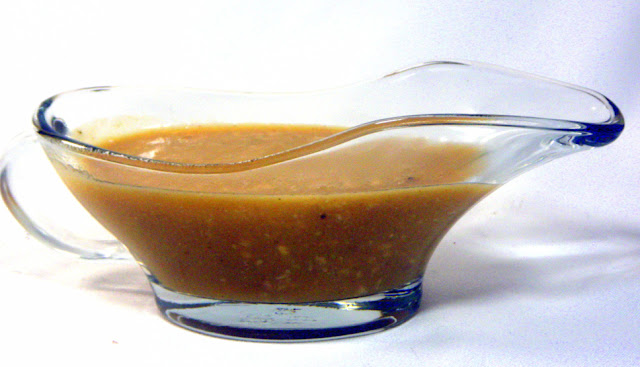 Chances are most people do not make gravy often enough to be pros.  Sometimes things happen (most often the gravy is too salty (NOTE: the drippings come out of the bird and runs through the outside seasonings.  Be careful about adding salt to the dripping gravy... It may already be salty enough... but I digress...)

Now, I am not saying you should only make Chicken gravy.  Go ahead, make that fancy turkey giblet gravy you only get once a year.  It's great, it's perfect.  But you also only make it a couple of times a year.  Anything can go wrong, not the least of which is the gravy is made last... 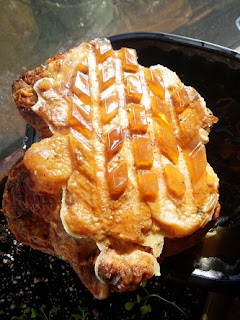 This is a photo of the bottom of a Rotisserie Chicken.  You really should be getting in the habit of scrapping the gel that is on the bottom and saving it.  It will freeze just fine and it has more flavor ounce for ounce than anything else on the bird.  It makes incredible dripping gravy.  One bird's worth of that jelly makes 2 GREAT cups of gravy, or 4 pretty good cups of gravy if you need to feed a small army.

This has the advantage of being able to be made in advance.  It does freeze if your turkey gravy comes out perfect...

But then, you know that there is never ever enough gravy for all those leftover plans any way...

But that's advice for Turkey Dinners... What about gravy for a Wednesday night Mashed Potatoes and Pork Chops meal? 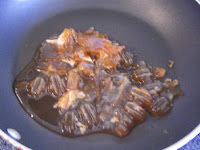 I am going to go into detail as gravy (for me) was one of those things I was terrified about first time I made it.  No Fear... This is easy.

Put this Gel in the bottom of a saute pan and heat away.  The gel will melt and you are on your way to gravy... 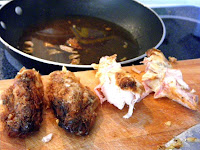 Heat over medium high heat until it begins to simmer.  Like I said, there is plenty of flavor, but I wanted a little more.  I diced up the meat that I could find in the wings.  Tiny amount of meat, usually eaten by the cook while using the rest of the bird for something else, but perfect amount for our task.

Carefully de-bone the meat making sure that there is no tiny bits of bone or cartilage attached.  It is fine (good actually) if there is any skin.

OK, now we have to decide if we are making GREAT gravy or just OK Gravy.  The difference is in the stock.  For GREAT gravy, rich and delicious (both gravies will be equally thick, but the 2 cup version of this recipe is much richer in taste).  OK, for GREAT gravy I add 1-1/2 cups of chicken stock.  In fact, go ahead and just make the GREAT gravy.  If you find yourself in a bind and need more gravy (who knew all those extra people would show up), once you have the GREAT gravy, you can always add 2 more cups of stock (and more flour... we'll cover the flour in a second). 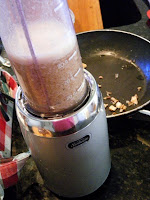 OK, we have a very thin stock like gravy so far.  But we want that thick gravy we all know from Norman's paintings (Norman Rockwell don't ya know).

Once this is blended, return to the pan.  You are 1 to 2 minutes away from gravy... 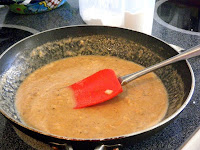 OK, last step is to add flour that will act as a thickener.  This moves the dish from a broth like soup to a gravy ....

With the liquid on a low simmer, add flour a teaspoon at a time.  Stir constantly.  It takes about a minute for the liquid to thicken, so go slow.. one tsp at a time (for this session, it only took one tsp.  But other times I needed more.

OK, now the final step is to taste.  As I have already warned, there is plenty of sodium (salt) in the gravy already.  You may want more and you are allowed... I do like more pepper in my gravy, but it is always salty enough for me.  But, as all the cowardly recipe writers say... Salt ad Pepper to taste.

It should be about the best gravy you have ever had, FAR better than any canned gravy you may be tempted to buy, much better than those pouches, but not as good as Turkey Giblet gravy... But certainly good enough to save your Thanksgiving!  And AMAZING on Wednesday Night! 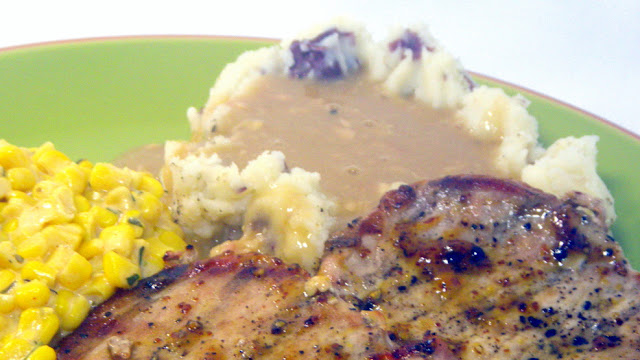 I am trying something a bit new this round of recipes... My own little culinary challenge of seeing just what I can do with a single rotisserie bird. So far, I used a single chicken breast to make a delicious...
Garlic Garlic Chicken and Dumplings (Red Lobster Copy Cat recipe for Garlic Cheese biscuits used as the dumplings). This recipe only uses a single Chicken Breast as the chicken ingredient, leaving plenty of the "bird" to continue the challenge.

I also made a Quick Cheesy, Sweet Corn Chicken Muffin recipe using one of the Thighs.

Next I made a Rotisserie Chicken Shepard's Pie recipe with a second Chicken Breast.

Next I posted a Rotisserie Chicken Cordon Bleu Pizza meal using just the meat from the legs.

I also made a Breakfast of Chicken and Waffles using the remaining Thigh. 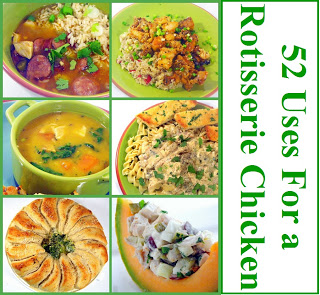 Total came in for the Gravy at FREE...  Stock (when homemade) is FREE, the chicken has already been paid for plus some pantry items, flour and pepper!!!

A Great accent to a meal for FREE!
Stay tuned, come on back tomorrow and see what else I make from the single bird!

And of course the Rotisserie Chicken makes this easy to make. Making this one of my new favorite additions to my "52 Uses For a Rotisserie Chicken"! Which now has blossomed well over 70 uses with still more to come!

What could be easier and tastier?

And as always, if you like this recipe and think you might want to give it a try, pin this to your Pinterest Board and be sure to follow me on Pinterest if you want to see the rest of my 52 Ideas (now at 65 and growing)!

Posted by Inspired by eRecipeCards at 10:39 AM

Email ThisBlogThis!Share to TwitterShare to FacebookShare to Pinterest
Labels: 52 Chicken Recipes, 52 uses for a Rotisserie Chicken