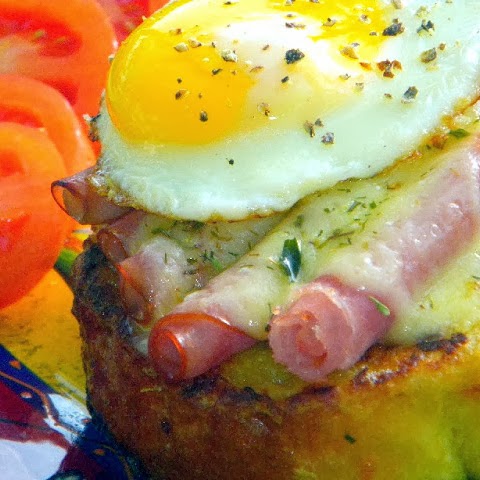 I am begging you not to tell anyone (especially Jackie)...

I have a secret.  I love very easy recipes that have the illusion of being complicated, and look spectacular (dare I say Restaurant Quality Presentation).  You can make a simple version of this sandwich in 5 minutes (it's just a ham and cheese sandwich).  You can make a ham and cheese and egg sandwich with just a tiny bit of effort, maybe an extra 5 minutes.  But this spectacular presentation takes less than 15 minutes. 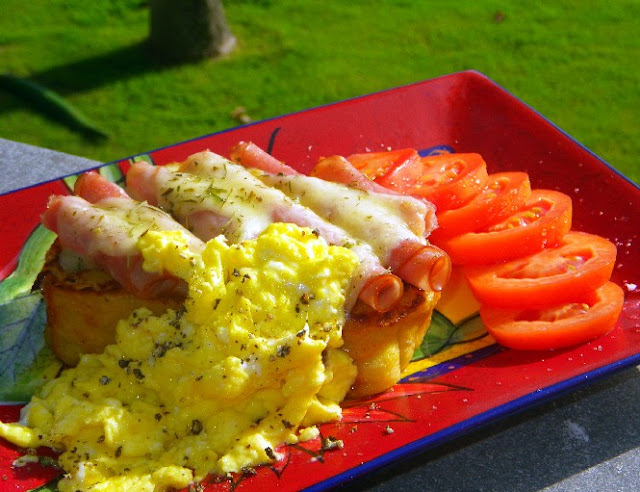 You can even fight the French and use scrambled eggs (Jackie's favorite) in place of a fried egg.  Don't worry about fighting the French, they will surrender.

But, in order to make that joke, I digress from the sandwich...

But I have one more digression... This recipe is part of  "the Project".  "the Project" is something I will be working on for the next several weeks.  It is part "Best of" series, like "Garlic Chipotle Parmesan Hamburger Buns for "the Project"; recipes that I have gotten right.  But it is also a measurement of my evolution as a cook. This recipe and presentation is a perfect example of what I want to include in "the Project"... Why make something simple, when with just a tiny bit of extra effort, you can make a masterpiece. 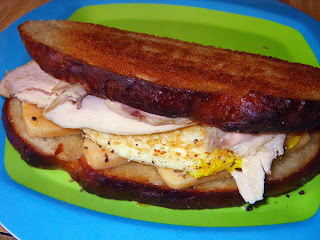 And here is what I am talking about.  Back on April 20th, my post for the day was..."A bad Croque Madame or a good Sandwich".  Believe it or not, the sandwich to the right is the same sandwich shown above.  The one on the right took less than 10 minutes.  The one above took less than 15 minutes.


I'll take the one above. 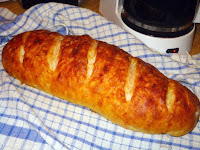 I started with a fresh loaf of "Eng Bread - A Sweet loaf of French Bread for "the Project".  You remember the post from yesterday.  Just a simple French bread, uses a short rise time, but has a little extra sugar in the dough. 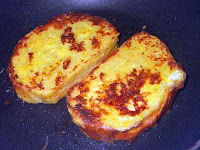 And now we start getting a bit fancy...


First, "Eng Bread" makes terrific French Toast.  The bread just soaks up the egg and cream mixture (heavy cream when possible to make French toast, whole milk in a pinch) far better than a slice of processed bread.  The classic version of the sandwich has an egg served on the top.  that is what separates a Croque-Monsieur from a Croque Madame.  The theory is that the name change is because the fried egg on top looks like a ladies hat.  Since, I was planning on making a Croque Madame anyway, adding a bit of egg flavor and texture and color to the sandwich makes sense to me. 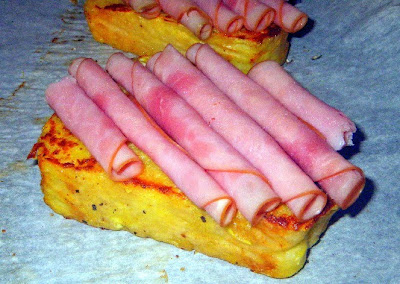 And while the toast is toasting, take just a second to "pretty up" the ham.  No need to just toss a couple of slices on top of the bread, take slices of thin sliced ham and roll them up.  Set aside till the French toast is done, and then top the bread... 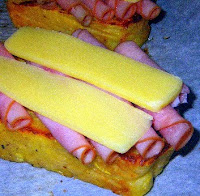 And now the cheese...


For this day, I made my Croque Madame with a Swiss cheese.  Cheddar, mozzarella, or the traditional emmental or gruyere which is the "classic" ingredients of the sandwich. 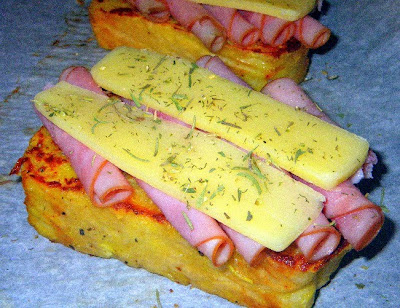 Pop this under the broiler for 5-10 minutes.  Keep an eye on it, as there is a fine line between melted and burned.


But, while the cheese is melting, either fry up an egg or scramble some for your wife... 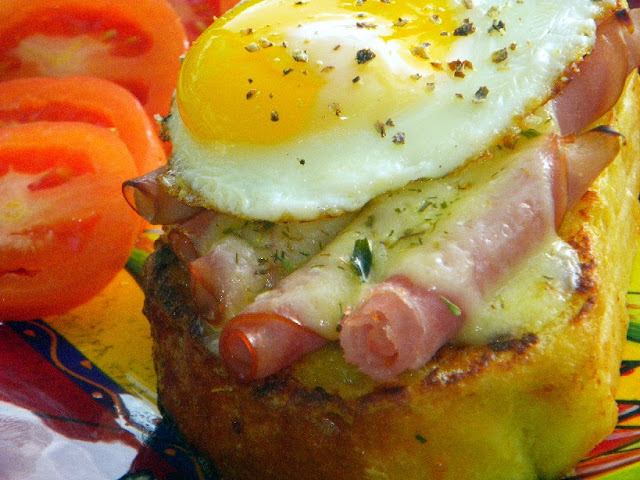 
But really, It's just a simple Ham and Cheese Sandwich.

Garnish with a sliced Roma Tomato


One more photo... While I was happy to make Jackie her favorite scrambled eggs, if you make a sunny side up egg, you get this extra little texture and taste... 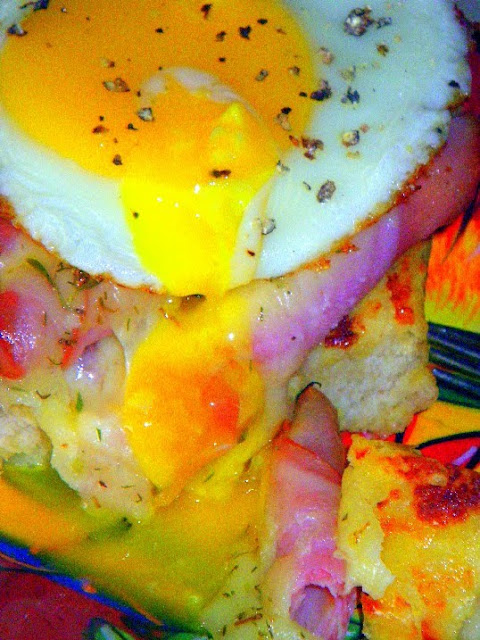 Funny thing is, I love this part... Jackie hates it.  But everyone can get the egg topping of their choice.  The scrambled eggs looked terrific! 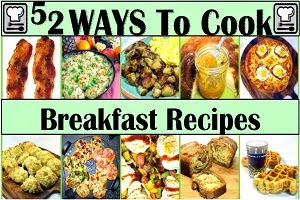 This simple recipe has been added to my growing list of "52 Breakfast Ideas!"

It's the most important meal of the day.  From fancy to simple, there are always ways to dress up a breakfast dish.  These are the meals that make Bed and Breakfast Inns legendary (and usually easier than you think).

Here's your chance to make your guests Ooh and Aah!