Steak Pinwheels ala Cookin' For My Captain 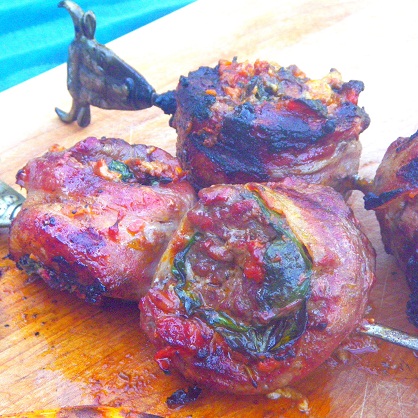 Has everyone survived this weeks "Storm of the Century"?  Hope your power stayed on, hope your trees stayed up and your lawn furniture did not end up in the next county.  I am ashamed to admit a certain amount of schadenfreude.  Living in tornado famous Kansas, with every warning, watch and "Storm of the Century" heading our way seemingly weekly, we have gotten used to family and friends calling to ask us if we were OK; I made more than one call last night checking up on my friends and family on the east coast.  With the exception of one broken window from a neighbors lawn chair, everyone I checked in with weathered the storm.  I do hope all my blogging buddies fared equally as well.

And in the aftermath of yesterday's "Storm of the Century", Today is a perfect chance to salute our best and bravest.  Those who serve, who put themselves, if needs be, where other's fear.  Lately (last ten years), we have asked more of the US Army than ever in our history.  In researching this post, I came across a visual aid showing the duties of the US Army. 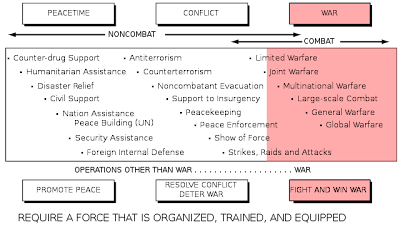 Never in our history have we asked so much for such an extended period of time.  2 land wars, ongoing (seemingly permanent) peace building presence in a hostile environment, and yet the envy the world for our capabilities.  All of this is being handled 100% by a volunteer force (although the use of the national Guard in these areas is a sin... but that's a debate for another place).  Take a look at the chart, these "volunteers" are assigned duties including disaster relief and civil support as well as humanitarian assistance.  While the morning after makes for snide comments about "the storm of the Century", it was and is always reassuring that in addition to the war games shown on TV,  the US Army stands ready in the event of the big one here at home.

Which leads me to Carolyn.  One of America's proud support staff.  She is a stay at home mom.  Home being on post at Fort Leonard Wood.  She has two beautiful red headed children.

She is also wife to a Captain in the United States Army.  If you will forgive one last "rant", a few months ago when Congress and President Obama were pondering a government shut down, it was decided that the US Armed Services were to be assigned "non-essential" for pay during the shut down.  Meaning, since they had pledged an oath and had a legal and moral commitment to see their mission through, the government could count on their continued service during the shutdown without pay.  If the shutdown had lasted a day, a week or a month, while the Captain (and privates and generals) could have counted on 3 hots and a cot, the Army wives would have had to make the best of uncertain paychecks, not knowing when they would start or even if the back pay would be made a priority.  Just seems the least we could do is to assign paying our military families an essential part of the US budget.  Shutting down national parks and not paying (or delay paying) a paralegal working for the Dept. of Justice (my wife) is "just" a terrible thing, adding this uncertainty to the pressures of an Army wife is unconscionable.  BTW, Congress and President Obama's determined their pay to be "essential".

But I "wanted to get that off my chest" digress...

Carolyn has a WONDERFUL blog, aptly titled, Cookin' For my Captain!  From Lettuce Wraps to White Chocolate Dipped Candied Orange & Pistachio Marzipan Bonbons (really, take a look, they are STUNNING!), she really shows her chops.  Cooking for her Captain (and the two children) looks amazing!

FLASHBACK FRIDAYS is a chance for bloggers to show off a favorite post from you past.  It's a unique post, not just a chance to "show off" something you did this week, but they encourage you to post a favorite dish from a month, three months or 5 years ago. 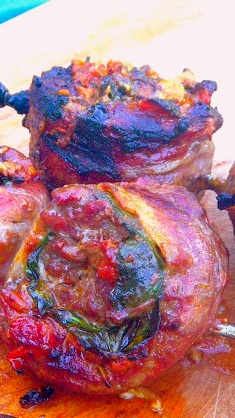 I had a grilling day planned last week.  Beef is actually becoming a rare treat for me.  Lots of chicken, fish and veggies, but because of the cost and somewhat because I am old and my colon is not what it used to be, I have decided to cut back.

But, there was a wonderful sale that ignited the inner caveman in me... MEAT, who needs that other white meat when you have BEEF!  And better still, when I plugged steak into the search feature on eRecipeCards.com, I found Carolyn's recipe featured steak wrapped in BACON!

Now, I did make a few changes in Carolyn's recipe...

As most grilling recipes are (and should be), Carolyn's had a limited number of ingredients.  I pimped mine up quite a bit, but stayed true to the ingredients and presentation.

First, Carolyn used a flank steak for her recipe.  I had a Kansas City cut (some people (east coasters) call this a New York Steak).  Much thicker, so I whipped out my manly meat pounder and manly pounded my... um... my cut of beef. to make a flat rectangle.

Next, Carolyn stuffed her pinwheel with red peppers.  I have a recipe for a red pepper Pesto (thank you Penny from Lake Lure Cottage Kitchen)  the pesto adds garlic, Parmesan cheese, and most importantly, Olive oil to the steak.  I stuffed the pinwheel and let it rest for an hour, allowing the pesto flavored oil to seep into the meat, adding a great deal of flavor.

And, while I was at it, I like blue cheese on my steak.  So a few crumbles of Stilton Blue Cheese topped it all off!

Carolyn has a delicious sounding Buttery, milky Cream Cheese Sauce that she used on her steak.

Since I had an essentially marinated steak (with the pesto) and the Blue cheese embedded inside the pinwheel, I chose to serve this without a sauce.

Please, if you are interested in trying a pinwheel steak recipe (or a terrific creamy sauce), take a quick look at Carolyn's ORIGINAL POST of this recipe.  Click the photo to the left or the blue letters to see her version.

So, here's what I did after being inspired by COOKIN' FOR MY CAPTAIN...

First, I made my marinade (I mean RED PEPPER PESTO)...
This is adapted from a recipe by Penny of LAKE LURE COTTAGE KITCHEN, one of my favorite bloggers who I will be talking about soon.  This is VERY EASY and VERY fast to assemble as everything goes into a mini chopper, whir for a few seconds and done!


Next, I assembled my ingredients

And you need skewers.  I had cute metal ones (with bull heads on them).  If you use wooden ones, be sure to soak in water before popping on the grill.

And from there, it's pretty self explanatory...

Pound your... um... steak flat and in a rectangle (always trim off the HARD pieces of fat from your steaks.  these cook into gristle and will never taste good).

Slather the pesto on
add some cheese
add some spinach
roll up, slice in pieces if too wide (mine were)
wrap with bacon and skewer to hold everything together while cooking

And I let mine sit in the fridge for an hour while the juices of the pesto marinated the steak.  Since the steak was pounded flat and the pesto coated so much of the area, an hour was fine to get the whole thing flavored.  there are advantages to the pinwheel preparation in addition to the dramatic presentation. 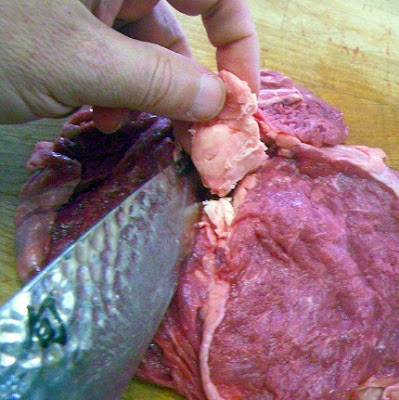 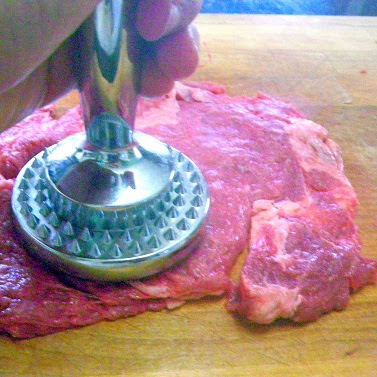 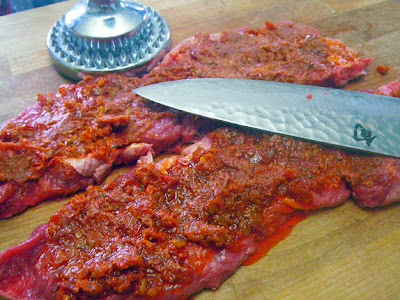 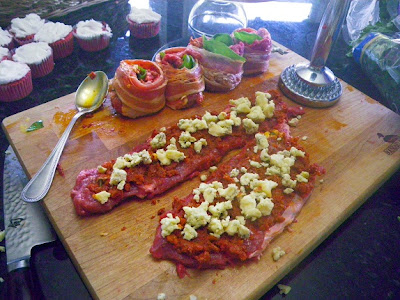 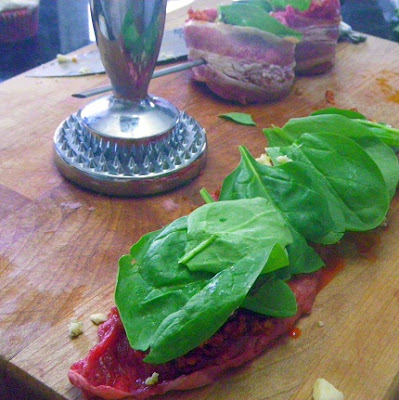 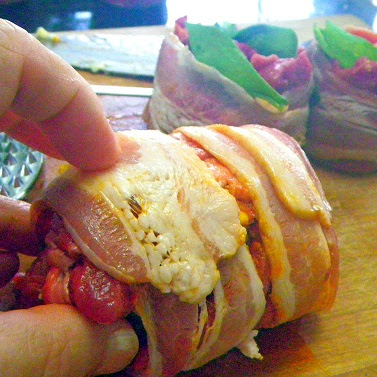 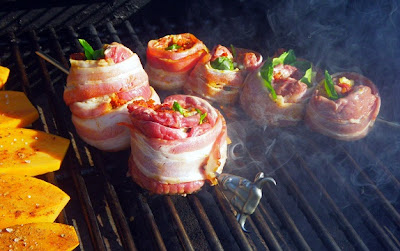 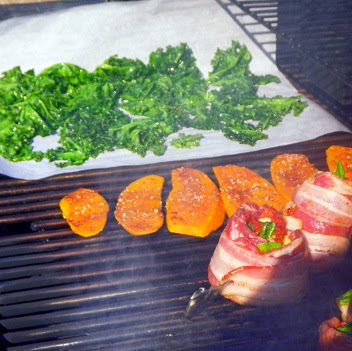 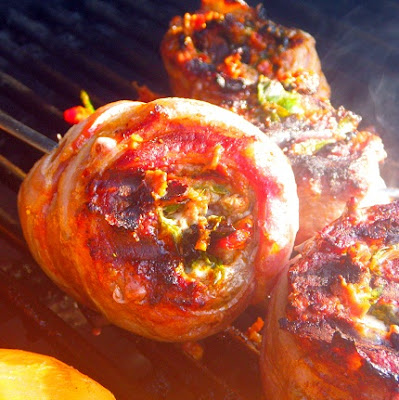 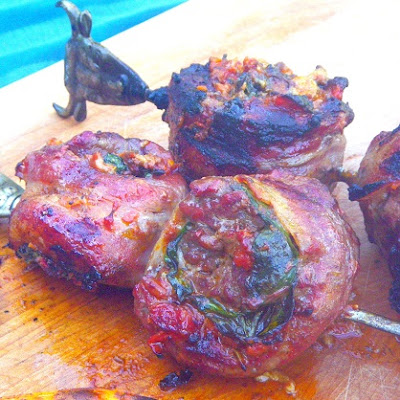 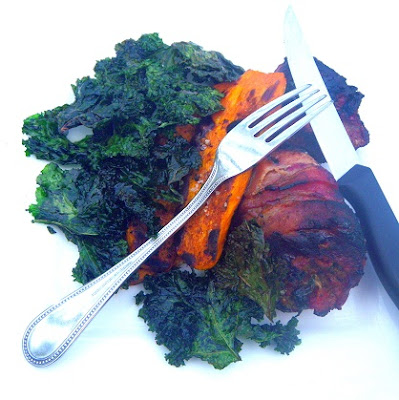 And serve with some grilled Cinnamon Sweet Potato slices and some wonderful Kale Chips and you have quite a meal!

And, I think this would work just as well with chicken or pork.

Thanks Carolyn, just a wonderful recipe.  I was certainly inspired.

And a personal thank you for the sacrifices all Army wives (and now husbands) make to allow their spouses to serve.  And pass my thanks on to your Captain as well.  Using the power of the military should always contain a human element.  Real people with real families follow orders with no complaints as they swear an oath to do.  We should all remember the faces of these individuals before we commit the faceless concept of the US military to foreign soil.

So, if I have tweeked your interest in Carolyn and the Cookin' For My Captain Blog, head on over and say HI for me! 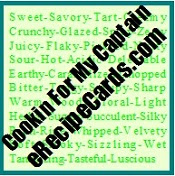 And for a quick look at what she blogs, click on the logo link image to the right.  You will see all the eRecipeCards that Carolyn has submitted to eRecipeCards.com.  You can add her recipes to your eRecipeBox (once you have a free account).


See how useful the site is and how easy it is to find new favorite bloggers!


These posts continue to highlight bloggers and recipes that I have found on  "eRecipeCards.com"..

Posted by Inspired by eRecipeCards at 9:42 AM