Chicken Vesuvio ala Wives With Knives 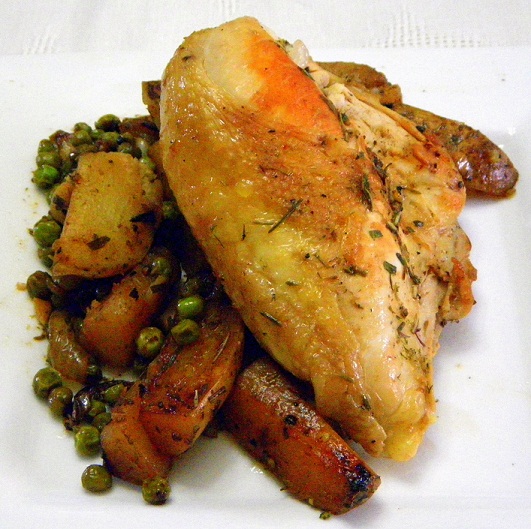 Wives with Knives... Now isn't that just about the best name for a blog EVER???  Cathy, the author, has a tag line, "Always Fun...Sometimes Edgy".  Cathy has been around the blog world for a very long time.  But the stats on her blog do not show that.  She moved from a blogger account to a self hosted web site in June.  I am sure that was a tough decision, but self hosting is a sign of someone taking blogging serious.

And Cathy does.  She posts several times a week.  Her recipes are wonderful (like this one).  She always credits the inspiration (she cooks recipes from fellow bloggers (something near and dear to my heart), as well as from her favorite cookbooks) and lists whatever changes she made or ways she plans to make changes next time she makes the dish.  Her commentaries are as important as the recipes, with tips and warnings to make replicating her recipes easy.

Before she made the move, she had over 1,500 followers!  She had over 400 posts in about three years as a blogger.  All of those posts made the move over when she transitioned to self hosting, but not all have made it into her recipe index yet.  All that stuff is very time consuming, but her archives are worth just flipping through page by page (and she does have a recipe index under construction with well over 100 of her favorites already listed). 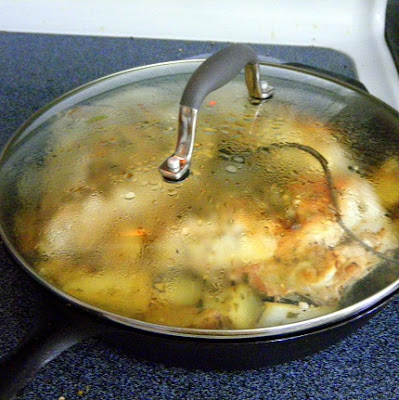 And indeed it was easy...

First, her recipe (click HERE to see her original post for her version of Chicken Vesuvio) calls for oven baking the dish.  I started this dish with some chicken that I had just bought that day.  It was a terrific bargain, on sale less than half the original price, but the chicken was frozen.  Popped in the microwave to thaw, I was starting with some partially cooked chicken.  By the time I had browned it, I was only about 40 degrees from a fully cooked bird.  I decided to just keep it a stove top recipe, cooking in a heavy cast iron skillet.  Not a huge change as with a cover on, it cooks similar to a dutch oven, but a change from Cathy's recipe. 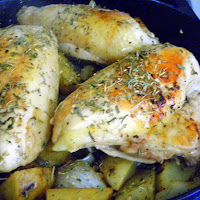 She also used oregano and granulated garlic for seasoning.  I have a wonderful recipe for a spruced up Herbs de Provence I call, "Not Your Grandmother's Herbs de Provence".  I had just made up a batch of it a week ago, and always look for reasons to use it.  Oregano and garlic are ingredients as well as lemon zest, Rosemary and a few more tasty hints of season (go ahead and click the blue letters to see my formula).

Even in a covered cast iron skillet, I monitored the internal temperature of the chicken with a remote temperature probe.  I was cooking bone in, skin on breasts that were very large.  No way to cook them by time.  I like my chicken just so, and really resent all the work and then serving a dried out over cooked bird (or piece of bird).  So, monitor that bird.  Remove from the heat when the thickest part of the bird reaches 160 degrees.  Allow it to rest for 5 minutes before serving and it will even out a few degrees more.  Succulent, moist and tender.  Perfect results every time that I could never replicate when cooking by time.

Finally, she used white wine in her recipe.  I only had one bottle in the house, it was a bit pricey and I decided to not make my $5 meal into a $35 meal.  I used just a bit of red wine vinegar in it's place and more chicken stock.  I am sure the vinegar added a different tang than the white wine would have, but cooking on a budget is important to me.  Trader Joe's "2 Buck Chuck" is a great cooking wine.  Anything priced higher is a drinking wine to me. 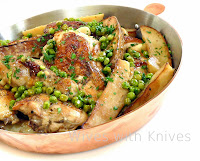 But, before I get to my version of the recipe, take a look at the FABULOUS food styling photo of Cathy's finished dish (that's her photo on the right).  Beautiful colors that really pop!  I love surfing through her blog, with an eye towards replicating some of her photo ideas.  She is indeed top notch.

And again, her version of the dish can be found at WIVES WITH KNIVES - CHICKEN VESUVIO. 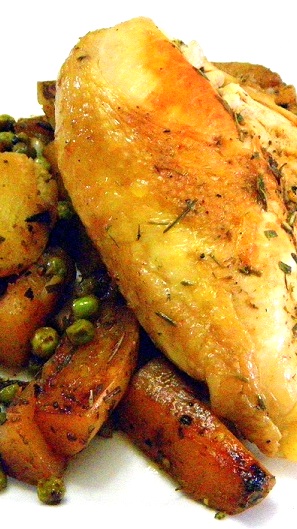 A WONDERFUL one dish meal, very little mess, but the garlic infused chicken stock that soaks into the potato wedges and steams the chicken is just amazing.  With all the extra little taste accents in the Herbs de Provence, I can not recommend this enough. 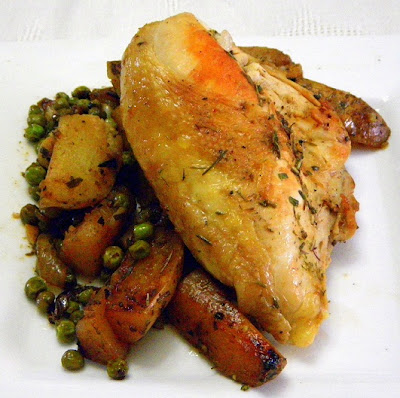 These posts continue to highlight bloggers and recipes that I have found on  "eRecipeCards.com"... 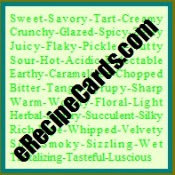 Old friends will know me as Dave from my blog "My Year on the Grill".  You new folks probably found this blog while looking around the website,  "eRecipeCards.com".  Either way, I am the driving force behind both.


I hope that you enjoy my posts, my take on the work of others (but really, isn't all cooking building on the work of those who cooked before us???).  I hope I have peaked your curiosity in Wives with Knives... Drop in on Cathy and say hi for me!
Posted by Inspired by eRecipeCards at 8:26 AM