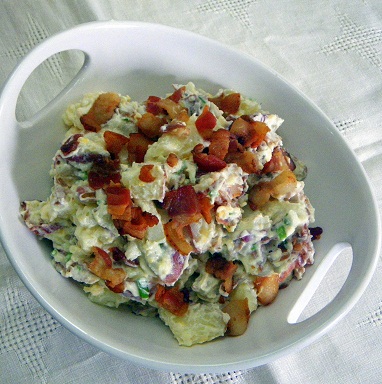 I got a message yesterday, inviting us to a neighbors house for hamburgers, beer and wine.  As always, I asked if there was anything I could bring (actually hoping I could bring a dessert).  Instead I was asked to bring potato salad... OK, why not.N

Now I have a standard recipe for tater salad.  It's very good.  But I have had several BBQs in my back yard and I usually do indeed serve my stand by recipe.  I even served it just a couple of weeks ago to these very same folks.  For a minute I was torn between making something that obviously was a favorite, or something new.

And then I did my new favorite thing to do to get ideas...

Head over to eRecipeCards.com.  At the very top is a search function, I plugged in "Potato Salad"and low and behold, I had 8 choices to look over.

There was an oriental potato salad with olives, red onions and no cream sauce... interesting.

There was a potato, asparagus and feta cheese salad... Also very interesting, but does not really scream side dish for grilled burgers.

Then I noticed there were two "loaded" recipes, recreating a loaded baked potato in a potato salad form.  I compared the two recipes.  One had a beautiful photo and indeed was everything that was contained in a baked potato, using just sour cream as the sauce.  The other recipe, to be honest and fair, had a good (but not as dramatic) photo, but the extras in the recipe included not only sour cream, but a few extras to make a creamy sauce that would be a true combination of loaded baked potato and potato salad, as opposed to a sliced and cubed potatoes coated with the toppings of a loaded potato.  make sense, nothing wrong with potato pieces coated, as opposed to the ingredients in a loaded BP in a true potato salad form.  i was asked to bring a potato salad, so I wanted it to at least  look like a potato salad.
And besides... both recipes had...  BACON BACON BACON BACON BACON
I love bacon! 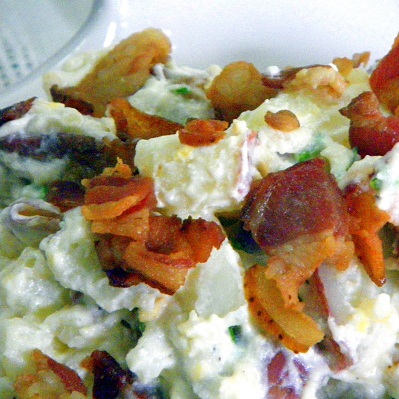 And I just LOVED this recipe.  I made it in the morning.  Had a nice plate full for lunch, stored it in the fridge until the party.  Like most tater salad recipes, if you have the time, make it up early.  The longer it sits, the more the flavors come out and pop.  It was a different (better) dish served about 6 hours later. 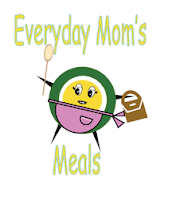 The recipe came from Krista, from the EVERYDAY MOM's MEALS.  I just loved roaming through Krista's blog.  Her recipes are exactly what she claims. Family friendly, always a little bit extra (like this).  She gently shares her faith with kind words and an occasional reference to her church upbringing and the importance of the church in her life now.  She has only recently started hosting a Sunday recipe roundup, Church Supper Sundays (the link is to last week's event).  I have a history of church pot lucks myself.  Growing up Southern baptist, some of my favorite church memories were those Sunday afternoons of food, pick up baseball games and friends.  As an aside the very favorite thing I ever wrote as a blogger was a Thanksgiving tribute to my "Church basement ladies" who actually contributed to my first culinary success.  I will be very excited to hop in on Krista's Church Supper Sundays this week and start in as a regular.

Krista is a Mom to a 6 year old and wife.  Her recipes usually are on the "feeding the small family" size, but easily doubled (like I did for this) if you are feeding more.  She has been blogging since May of last year, but has made a serious effort at posting daily this year.  With only a small hand full of missed days.  I am committing myself to posting every day in August (and beyond, but let's deal with August right now).  Krista is working at being a force in the blog world!  Her Facebook account is filled with foodies who love her.  I liked her and noticed she topped a thousand likes (and here I sit at 4... but I digress).

I like Krista's site a lot.  I like Krista a lot.  Her recipes and her personality that she shows in her blog is exactly what the title of the blog implies...  Meals from an everyday mom.  Anyone with kids, anyone with a family to feed would do well to have Krista as a friend! 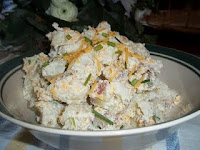 Or, anyone looking for a Potato Salad Recipe.  I made a few changes in the recipe (I never can leave well enough alone),   Nothing major.  You can see Krista's original recipe by clicking HERE.   That's the photo of her dish to the right.  I like that she saved a few bits of the cheese to garnish the top of her salad.  If you scroll back up to my photo, I chose to save a bit of bacon... cause I like...

Krista only used 5 slices of bacon.  I used a full pound.  First, it was going to someone's home, so I wanted to make sure it had lots of bacon, second I doubled the amount of ingredients anyway (3 pounds of taters instead of Krista's pound and a half)  But the pound was much more than doubling. So third... well, I enjoy a bit of bacon (have I mentioned that?).

Next, I had a cup of Ricotta cheese and used that instead. If you have been following this blog, I have said before I AM CHEAP.  Ricotta is a fine substitute for creamed cheese, is more expensive, if I have some left from another recipe, I am going to look for an excuse to use the ricotta.  Much better to put it in this recipe than to let it become a science project.  So, when she used 3/4 cup of sour cream, instead of doubling that, I used 3/4 cup of Ricotta along with her 3/4 cup sour cream.

Finally, Krista peeled half of her potatoes.  I never peel mine.  I like the extra texture, the extra color.  The vitamins and good stuff in taters is mostly in the peelings.  Much more healthy to eat peel and all. And finally, young chicks like Krist do not care about this, but I need the roughage... Please don't ask for details. 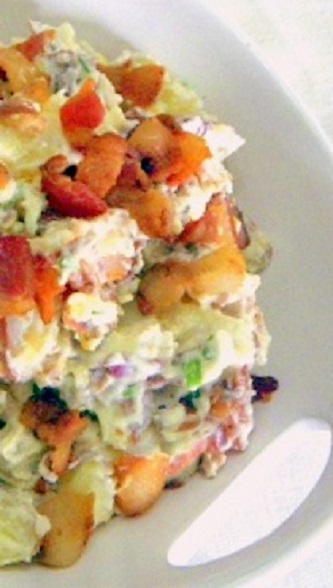 But here are the details of the recipe...

3 pounds red Potatoes, diced into bite sized cubes
2 TBS Ranch Dressing
3/4 cup Sour Cream
3/4 cup Ricotta Cheese
1/2 cup Mayonnaise
2 TBS Garlic Flakes
1 TBS Ground Pepper
2 tsp Dijon Mustard
a BIG HANDFUL of grated Cheddar Cheese (I used up a partial brick, Krista called for 1/2 cups to 3 pounds of potatoes.  Mine was at least a cup, but not that much)
but I made up for the less cheese with MORE BACON
1 pound of Bacon, sliced to quarter size pieces, fried crispy
1/4 cup fresh cut chives

OK,  the recipe is pretty easy.  Mine is a tad easier than Krista's, as she did a little extra step with the salad dressing.  I just cooked the potatoes, allowed em to cool, mixed everything else in a stand mixer.

Folded the liquid into the potatoes (gently, don't mash the taters).

I still had  about a cup of the goo left over.

I am thinking potato pancakes sometime this weekend and this as a topping instead of sour cream. 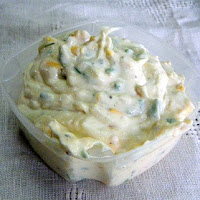 Anyone else have any ideas???

Maybe add some peas and pasta... But, like I said... i am cheap.  Saving it for something. 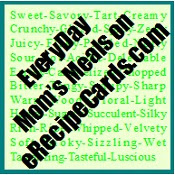 Krista, I LOVE this recipe (BACON BACON BACON BACON BACON)!  Thank you so much for submitting this so I could find it.  I am now one of the growing legions of happy followers to your blog, happily checking in anytime you post something new!

And for a quick look at what she blogs, click on the logo link image to the right.  You will see all the eRecipeCards that Krista has submitted to eRecipeCards.com.  You can add her recipes to your eRecipeBox (once you have a free account).

These posts continue to highlight bloggers and recipes that I have found on  "eRecipeCards.com"..
Posted by Inspired by eRecipeCards at 3:04 AM