Mascarpone Cheesecake with a Mango Sauce 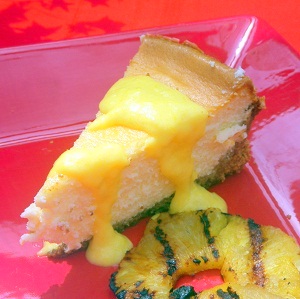 I forgot... I was busy... I was caught up in the British Diamond Jubilee fever... Who knows, but bottom line, I did not take any "in-progress" cake prep photos, nor a photo of the whole pie.  Much as the above shot is OK, I just do not feel it is worthy of this incredible dessert.  AND IT IS INCREDIBLE!!! 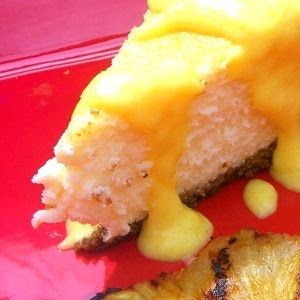 I wanted to give mascarpone cheese a try in the cake.   Also most recipes call for a bit of flour added to make the thick texture of a great NY style cheesecake.  I was after a lighter, fluffier cake and it all came off without a hitch!

And the real treat was the mango sauce topping.

Very simple to make, a fresh mango, peeled and pitted (wish that was easier to do).  Then I took about half of it, chopped it and heated in a sautee pan over medium heat.  I added a couple TBS of sugar, one tsp of lemon juice and continued to break down the fruit over the heat.  In about 10 minutes everything is cooked, soft and smells wonderful!

I added heavy cream to make the sauce, started at 1/4 cup and added a TBS at a time to get the right consistency.  Finally I ran the sauce stuff through a food processor to get the smooth, creamy, saucy look and texture.

And since I was grilling for the meal, I grilled a few pineapple slices sprinkled with brown sugar and soaked in rum! 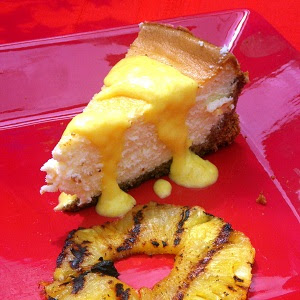 First, the history lesson (with thanks to WhatscookingAmerica.net)...

New York cheesecake is the pure, unadulterated cheesecake with no fancy ingredients added. It is made with pure cream cheese, cream, eggs, and sugar. Everybody has a certain image of New York Style Cheesecake. According to New Yorkers, only the great cheesecake makers are located in New York, and the great cheesecake connoisseurs are also in New York. In the 1900s, cheesecakes were very popular in New York. Every restaurant had their version. I believe the name "New York Cheesecake" came from the fact that New Yorkers referred to the cheesecakes made in New York as "New York Cheesecake." New Yorkers say that cheesecake wasn't really cheesecake until it was cheesecake in New York.
1929 - Arnold Reuben, owner of the legendary Turf Restaurant at 49th and Broadway in New York City, claimed that his family developed the first cream-cheese cake recipe. Other bakeries relied on cottage cheese. According to legend, he was served a cheese pie in a private home, and he fell in love with the dessert. Using his hostess’ recipe and a pie she made with ingredients he provided, he then began to develop his own recipe for the perfect cheesecake. Reuben soon began to serve his new recipe in his Turf Restaurant, and the cheesecake quickly became very popular with the people who frequented Reuben’s Broadway restaurant.

That wasn't so bad.

And now the soapbox editorial...

One of the great sins of the culinary world is the box, no-bake cheesecake.  the sin is not that they exist, the sin is in the name.  Call those no bake things whatever you like, but set them side by side with one of these beauties and you will understand.  Speed, efficiency, the hint of something special, all make sense.  But, I guess I understand, no one would buy them if they were called Faux Cheesecake.

A couple of notes...

If you've never made one of these, a word of warning.  They are incredibly easy, but the baking process is several HOURS.  Don't try to cut the time down.  It's part of the baking process to bake for an hour and 10 minutes, then allow it to continue baking while the oven is off and cooling for the next 5 hours (about the time for the inside of the oven to reach room temperature).  As in most things in life, good things come to those who wait.

And finally, this can be an expensive cake to make.  2 bricks of cream cheese and 2 tubs of Mascarpone can be expensive.  But, follow the sales in your store.  I saw Philadelphia Brand Cream Cheese on sale this week for 69 cents a brick.  Sale time is the only time I make this.
Alright, enough delay... 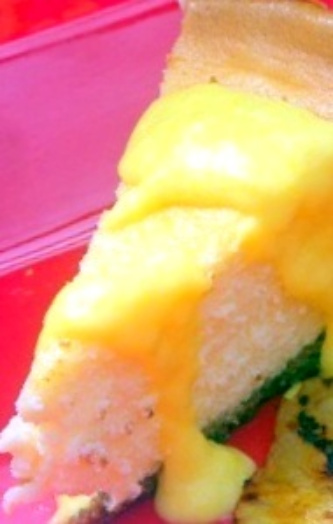 As I said, for a denser, more traditional style NY Cheesecake, add 1/4 cup of flour.  This was a delightful change of pace texture that was INCREDIBLY well received.  Everyone LOVED it!  A real winner.

Posted by Inspired by eRecipeCards at 6:24 AM

Email ThisBlogThis!Share to TwitterShare to FacebookShare to Pinterest
Labels: 52 Cakes and Pies at Home