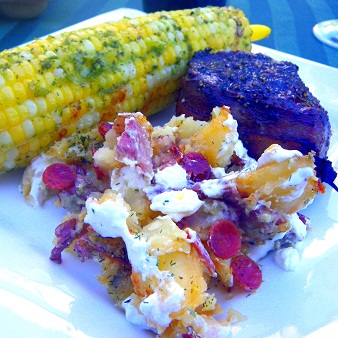 Hello everybody!!!  Did we all have a wonderful Labor day?  The date has come to be the symbolic "end of summer" celebration, but let's not forget the earliest reason for the holiday, a chance to celebrate the American worker, the American products and an social contributions of workers.  the goals of the early Labor movement (fair living wage that you can raise a family with, safe working conditions and respect for their contributions to the success of any company) are as important today as they were during the days of the Pullman strikes and President Grover Cleveland.  There is a great debate raging across the country to restore that "American spirit" and a new direction for American labor.  It is an interesting debate the entire world is watching.

Brings to mind an ancient curse, "May you live in interesting times".

But, that's a political blog rant.  this is a food blog.  Labor Day is also a great time to grill your supper! 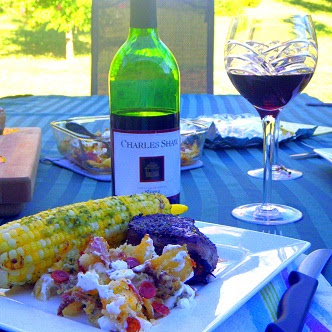 I need to apologize for the photos, I was in the shadows and it was hard for me to get the light balance right.  But no need to apologetic for the food.  After all, pepper steak, fresh local sweet corn and this new treat, Smashed and Loaded Baked Red Potatoes!

And top it all off with a fine bottle of wine... The Charles Shaw winery is famous for...

OK, some of you are already smiling at this post.  If you were to take the time to make this incredibly EASY and incredibly tasty little side dish, you all would be smiling.

I did indeed start this dish inside in the oven.  I changed a bit from the original recipe by finishing it off in my grill (indirect heat, when not directly over the fire, the side of your grill becomes an oven).

But before I get into this recipe, let me introduce you to Heidi of the FOOD And FUN Blog.  Heidi has been a blogger just for about 7 months.  But in that time she has slowly grown to a nearly everyday blogger.  We all blog for different reasons, but committing your self to posting something each day forces you to look at every dish as a potential blog-worthy event.  Becoming an everyday poster will make you rethink your food everyday.  You will become a better cook.

Take this recipe as an example...

We all probably have a favorite brownie recipe.  But Food and Fun's "Double Fudge Kahlua Brownies" certainly has me intrigued.  It has everything you would expect in a premium brownie, nuts, lots of chocolate, fudge icing... but also a secret ingredient you would not expect to see in a brownie recipe.

I am indeed intrigued.  And go ahead and click the photo to read over that secret ingredient... You'll be intrigued as well.

And again, baked eggs are a favorite for us.  Adding Prosciutto as well sounds fantastic, but once you get into the recipe and see her use of ricotta cheese sure got my "inspired by" muscles twitching.

Just a couple of examples of Heidi's posts.  She makes real food, just a tad bit more... interesting (see I can tie this post together  ;-)

I looked, but I could not tell who Heidi cooks for, she is keeping her personal life pretty close to the vest.  But from the size of the recipes and photos, I am guessing she cooks for a family.  A lucky family indeed!  here's a quote from her very first blog post...


Since the majority of the cooking/baking I do is mostly for fun, I decided on Heidi's Food For Fun.  I believe food should fun and easy to make, and taste good.

So kick back, relax, and enjoy. 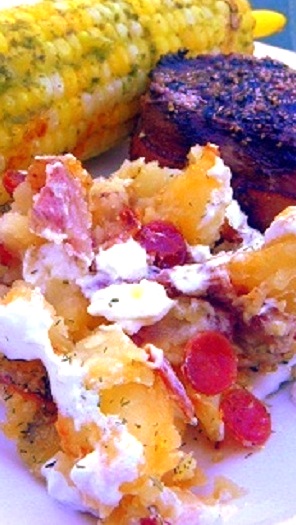 As always, I had to make a change in her recipe.  She advises using bacon.

Just kidding, I love bacon.  Everything tastes better with bacon.  So much so that I was out when I started assembling my ingredients.  So, I pondered what I could use in place.  For awhile, I considered adding some taco seasoned hamburger.  I also thought about using a bit of left over ham from breakfast.  But then I found a free sample that I got from a store recently, some little baby pepperoni.

And, while I followed the recipe very close, as I said, once I pulled the potatoes out of the oven, instead of a second baking session (as Heidi's recipe calls for), I moved the dish to my grill to finish "baking".

While the pepperoni was a pretty major change (spiced sausage is almost as good as bacon), these changes, in my mind, do not justify my claiming the recipe as mine.  This was truly "inspired by".  So, I am going to point you to Heidi's original post for "Smashed and Loaded Baked Baby Reds".  As usual, click the blue letters or the photo above to be magically taken to Heidi' blog post of this recipe.

The combination of double baking, cheese (oh yeah, second adjustment I almost forgot, I used Blue Cheese.  Heidi is pretty OK with using a cheese of your choice in her post), finishing with the sour cream and herbs as well as the rustic presentation makes this recipe a real winner.  This is going on my permanent "make again" list, as Heidi's blog is going on my sidebar as a permanent "I want to see what she is cooking" list as well!

So, if I have tweeked your interest in Heidi and the FOOD AND FUN Blog , head on over and say HI for me! 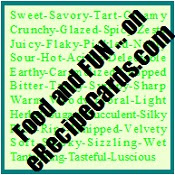 And for a quick look at what she blogs, click on the logo link image to the left.  You will see all the eRecipeCards that Heidi has submitted to eRecipeCards.com.  You can add her recipes to your eRecipeBox (once you have a free account).


These posts continue to highlight bloggers and recipes that I have found on  "eRecipeCards.com"..
Posted by Inspired by eRecipeCards at 8:55 AM